Did you read the Nashua Election 2021 article printed in today's Nashua Telegraph?

Even though fellow candidates and I followed the 200-word count limit, entire paragraphs are missing from the answers.

Here are the questions and complete answers that I provided. I am underlining sections of my responses that are missing in the Sunday, October 31 newspaper.

At the time of this post, I have contacted The Telegraph and requested that they issue a correction.

The last year and a half showed us local elections matter. Instead of listening to the average resident, the taxpayers, the ones who pay their salaries, the decisions coming from City Hall have been driven by partisan selfish politics. I believe that City Hall is not working for our residents, our students, or our small businesses. It is time for a change. If elected to represent Ward 08 neighbors, I will be a voice for reason, respect, and restraint. Resist the urge to stay home on Nov. 2 and instead together, let’s show City Hall that we are paying attention. Vote Parks for Nashua, Alderman Ward 08!

QUESTIONNAIRE
Provide responses representing your platform on the following issues. Limit responses to 200 words each.

I have spent most of my adult life having to process information, listen to sound advice, and make difficult decisions. Having moved around so much because of the Marine Corps, our family takes great pride in our ability to get to know our neighbors, learn about the people and places we live, and shown genuine care for our community.

I have significant budget operating experiences. As a Marine Corps Officer, I was responsible for thousands of dollars of equipment and lives.

I understand the process of negotiation and that sometimes, no deal is better than a bad deal. I know that I don’t know everything and still must continue to learn.

In the Marine Corps, we are taught about the “5,000-year-old mind.” This is a reference to the 5,000 years of written human history. Being a lifelong learner is ingrained in me. I am a reader of various sources. I don’t limit genres of interest, but a few include current events, history, biographies, and business.
I am earning my Masters in Business Administration through which I am gaining even more knowledge in all things business.

My experience, attitude, and work ethic all make be a qualified candidate for this office.

When I received the work promotion that moved us to Nashua, our family could have chosen to live anywhere in New England. We chose Nashua. The excellent reputation of Bicentennial Elementary was one of the factors in our decision to move to Ward 08. Having lived in many places across the country, Nashua is a great place to live and raise a family.

Our city is consistently ranked as one of the safest. This is thanks to our outstanding police department, fire department, and members of the community.

The perception is that there is a ruling political class in Nashua that does what they want, disregards tax-paying citizens, and only cares about getting and keeping power. People are disgusted by City Hall’s arrogance in their decision-making.

People elected to public office at any level are supposed to be representative of the people and their decisions should also reflect as much. Constituents may not always agree with the outcome of a stance or a vote, but what I will bring to the role if elected is a willingness to listen and to have the hard conversations, respectfully. This is what is missing in our city right now.

We have a mayor that is out of control when it comes to spending and power. The Aldermen allow the mayor’s behavior and provide zero oversight. It’s time for people in Ward 08 and across this city to have a voice that is reflective of them at City Hall.

The most pressing issue that I’ve heard from Ward 08 citizens and across Nashua is a real concern about the local attempts to take control of the police commission, and not keep them independent of Nashua politics. When you ask anyone why they want local control of the Nashua Police Commission you cannot get a straight answer or anything specific. For over 100 years, Nashua's Board of Police Commissioners has been appointed by Democrat and Republican Governors and we have a great police department. Let’s keep it that way.

4. WHAT IS YOUR OPINION ON BALLOT QUESTION 1 – RELATING TO SPORTS BOOK RETAIL OPERATIONS IN THE CITY OF NASHUA?
101/200 words

I see the dangers of gambling just as I do with drug use. In both instances, I don’t encourage people to do either. What can begin as honest fun for some, can turn into an all-consuming life ruining addiction. That said, I am cautious about the government telling people what they can and can’t do with their money. People can bet on sports online, so I don’t see much of a difference. My concern is that money corrupts and if the revenue is generated, what is this new revenue that the city will have access to going to be used for?

5. WHAT IS YOUR OPINION ON BALLOT QUESTION 2 – RELATING TO THE CHARTER AMENDMENT CONCERNING THE POLICE COMMISSION?
143/200 words

I think the police commission should remain as it currently is, independent from Nashua politics. For over 100 years, Nashua's Board of Police Commissioners has been appointed by Democrat and Republican Governors. Not the local government. Why? To keep the integrity of the police commission from being destroyed by corrupt local politics. I question the personal power motives of those that are leading the efforts to change a structure that has not only worked, but been extremely successful.

The aldermen rejected a proposal to allow voters to make a change. Two weeks later, a citizen petition was submitted to put the measure on the ballot. The rules for attaining those signatures are in question and pending the decision of a judge.

I support accountability and transparency. I support citizen petitions that follow the rules. I support keeping NPD independent from corrupt local politics.

6. WHAT IS THE BIGGEST ISSUE FACING THE CITY/BOARD OF EDUCATION AS WE EMERGE FROM THE COVID-19 PANDEMIC, AND WHAT ARE POSSIBLE SOLUTIONS?
200/200 words

As we emerge from the pandemic, we have elected city officials who have been emboldened in the name of “public safety” to go after the personal freedoms of our neighbors, our students, and our small businesses. Because of these attempted power grabs of personal freedoms, elected people have driven the narrative on making it socially acceptable to regularly ask someone about their medical history when it should not be. Asking someone about their medical history should not be socially acceptable.

The biggest issue facing the city as we emerge from the pandemic is that city elected officials don’t listen to the residents. The mayor does what he wants and is left unchecked by the Board of Aldermen. The board of education doesn’t listen to the parents and instead, bullishly goes after parents. Spending is out of control, and this is highlighted by the Performing Arts Center.

I view the role of alderman as one in which I listen to constituents and make decisions based on their feedback. Decisions at the city level should never be about what is politically expedient for the mayor or other outside political influences. This election is about policy and people, not about party and politicians.

7. IN YOUR OPINION, WHAT MAKES NASHUA STAND OUT AMONG OTHER CITIES IN SOUTHERN NEW HAMPSHIRE?
137/200 words

We have a very fun, intelligent, diverse community. We have an amazing group of first responders that includes our nationally accredited police force. We have all the conveniences that anyone could ever need. We have an impressive business community from small family-owned to big name retailers. We have two of the three Chick-fil-A’s in the state.

While we may not have the close mountain views in our backyards, we have easy access to endless modern conveniences. You can go to the grocery store, Target, Pressed, and Hayward’s on any given day and do it all within an hour. In any city there are always areas that can be improved, but overall Nashua is easy to commute around, safe, and clean.

It truly is a great place to live and a place we are proud to call home. 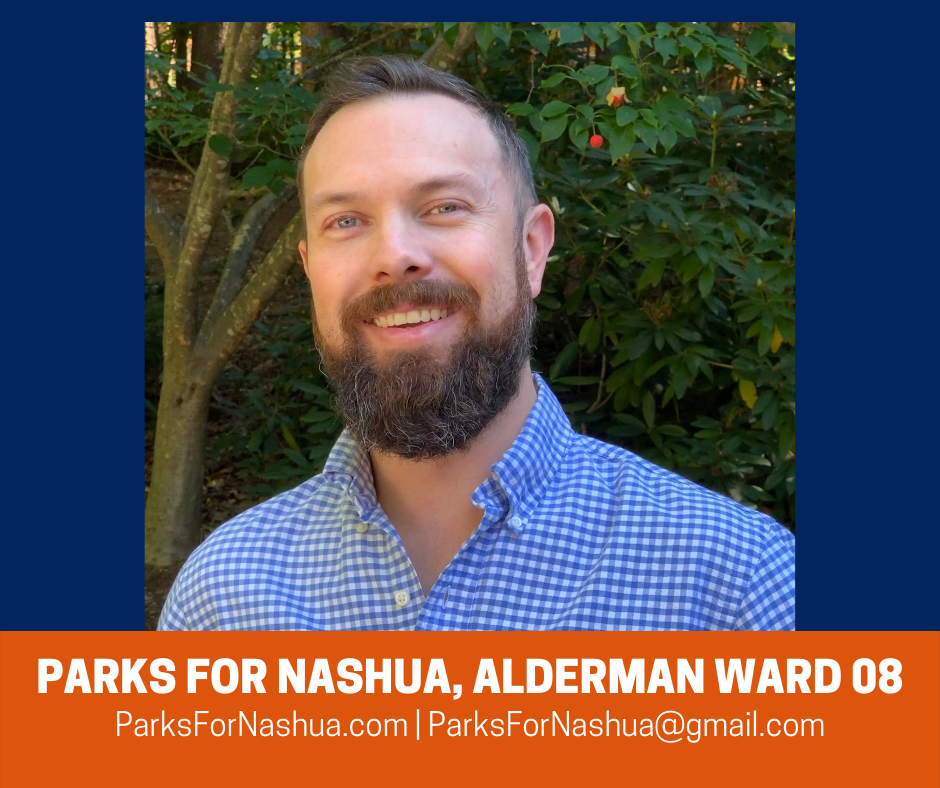